So I staggered through another week... 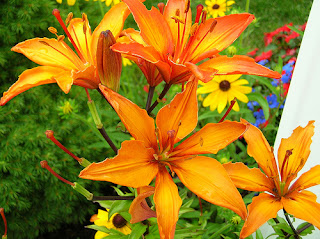 And hoping that Monday was not an indicator of how the rest of the week will go...

I have a vase full of lilies on my desk right now that look a lot like these --> though the ones in the picture are not dropping petals all over. (I picked them up Wednesday, so I suppose it should be expected.) They do cheer up the place a bit.

So last week mostly sucked. Sunday I took Wanda to the airport. Monday I ran errands during the day, and had planned to get up at a reasonable hour on Tues to go sew or something. Ha! As if!

I had a hysterectomy back in '94, because I had a rather nasty case of endometriosis. They took everything, including my ovaries and the cervix. So I shouldn't have started bleeding Monday night- but I did. Not knowing why, and not being entirely stupid, I drove myself to the emergency room. I ended up in a private exam room, wearing a glorified paper towel, with no tv, no magazines, nothing- for several hours. At least they turned the heat up a bit for me, so I wasn't freezing.

The doctor there couldn't figure out where the blood was coming from, and the gynecologists of call that night were busy with an emergency c-section and a pair of twins. So they didn't have time to come see me. So they sent me home with some pain pills for the cramping, and told me to follow up the next day.

So the next day, I got an appt to see a 'women's health' person at my usual clinic. She was mystified. By then I was only spotting, but we still needed to figure out what was going on. So I got another appt with the gynecologist, who didn't really find the site of the bleeding, but did find some really tender spots. So after the ER visit and spending the week at the dr, the upshot is: I shouldn't have been bleeding but I was. The best guess is that I had a random spot of the endometriosis crop up and break loose. And with the tenderness, chances are pretty good that I have some active nodules and scar tissue around where my uterus and cervix used to be. Add the hot flashes that I'm having a couple of times a week, and it sounds like my hormones are messed up. Joy.

The nice thing about the week was that James came up Weds night and spent a couple of days here with me. It was *really* nice to have him around- the added support was really good for me. Thursday evening I made the first batch of beef stew of the season, which is always really yummy, and then later a bunch of folks came over and we ate ice cream and watched Lion in Winter. It was a lot of fun- especially saying the best lines along with the actors. :-) ("I'm vilifying you, for God's sake pay attention!" is one of my favorites...) Friday was just a grey day, so we slept in, laid a fire in the fireplace, drank cocoa and hibernated. I had to send James home Saturday (Boo!), and took a nap after he left. Went to brunch Sunday with Karl and Linda, at a new place called 'Toast'. The place was really busy, and it was tiny so it took awhile to get a table. But the food was good. And then we went to their place and hassled kitties while talking about the baronial storage unit and stuff- apparently they're trying to reorganize things so they're easier to use and keep track of. Looking down the list, I had no idea that the Barony had so much stuff! Wow! Of course, it really is a very big barony, and they need lots of stuff, but still...

Monday I slept nearly all day with a rather nasty migraine. Only now beginning to feel better.

James will be up Tuesday night again, because he's flying out at an ungodly hour to Little Rock- the family is getting together now, as Aunt Donna isn't well, and they don't want to wait until there's another funeral to see everyone. I'd have loved to go, but I can't afford it, he can't afford to take me, and I'm on kitty duty anyway. Boo.

Speaking of kitties, it's time for their evening nummies. Shadow will be happy of course to share his kitty breath with me. (Blecch!)
Posted by Liutgard at 11:20 PM

Who said Aunt Donna isn't doing well? I don't think she got the memo.