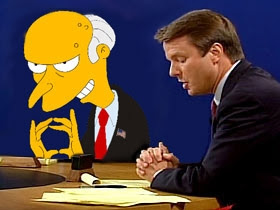 Ok, the picture is from the VP debate last time around, but still...

So Edwards is out. Can't say I wasn't expecting it, but still, it's disappointing. I REALLY like Edwards and think he'd have made a fine President. *sigh* Well, let's hope that President Obama is smart enough to nominate Edwards for Attorney General.

Let's see, what else? Larry was over last night and he worked on his tunic and I finished James' Hospitaller surcoat. Claire will be over tomorrow and I'm sure we'll find something to occupy our time. Or find some trouble to get into!

PS- if you put frozen berries in your oatmeal, it will turn purple! Very tasty, but the color takes some getting used to...
Posted by Liutgard at 11:39 AM No comments: 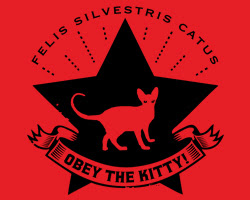 We all know who is *really* in charge around here...

Wanda just got home from yet another business trip, which means that (hopefully) I will not have the War of the Worlds happening on my blankets tonight. I left my door open last night, and Shadow and Zoe were scrapping over who got to sit on what side of me and whether they were allowed to lie down or not. Or rather, Zoe growled a lot and Shadow did his very best to look totally innocent. Ha! I am not fooled!

I just talked to Stephen, and he says they have something like 6" of snow in Eugene! Not fair! Eugene almost never gets snow! I want some too! Hey, I have milk, tea, and Malt O Meal- I'll not suffer if I'm snowed in. And it would be fun to play in. It also might hide the front lawn, which looks pretty sad at the moment.

Speaking of sad, I've kinda had a rough week. The depression has really been smothering me, and left to my own devices, I could have stayed in bed all week. Thankfully there were groceries to buy, etc, so I had to occasionally scrape the moss off and leave the house.

I finally finished reading the Salian Laws, which are early Frankish. Pretty cool. Not so nice to know that I'm only worth 200 solidi in weregeld. 'Cause I'm over the hill. (Hill? What hill? I don't remember seeing no hill!) Now I'm reading a biography of Charles of Orleans. *Really* interesting, seeing the ins and outs of diplomatic practice, etc. Poor guy was captured at Agincourt and spent most of his life as a hostage in England. The various negotiations for peace and/or his release dragged on and on and on... and the Burgundians helped it drag on too. (Bad blood between Orleans and Burgundy- killing each other's fathers tends to do that.) And I'm spraining my brain a bit- he was a poet of some note, and his poems and letters excerpted in this book are not in translation. Oy oy oy, I have forgotten so much!

I have a Hospitaller surcoat about half done for James, and next I have to make myself a winter coat. My old winter coat no longer fits and besides that, it was threadbare. My raincoat is pretty threadbare too, and it doesn't fit either. None of the patterns I've seen are really what I want, so I think I'm just going to draft a G63 and call it a coat. Because I can. :-)
Posted by Liutgard at 6:08 PM 2 comments:

One more year.
God give us the patience to endure...

My cholesterol is still a concern. Apparently my HDL is very good, much better than normal, but the LDL is high enough to put me in the not-so-good zone. More drugs, basically because I have other risk factors. And my blood pressure is up, which is a bit of a concern. Bleh. I can't win for losing.

Last night I was at a party that the Portland gang of Street Prophets threw. (http://www.streetprophets.com/) Great bunch of folks. Wolfie is out from back east- thinking about moving out here and of course the Portland Relocation Committee was happy about this. I took a batch of brownies, which had most of us in a stupor. Rain made some really yummy meatballs, which I ate too much of. As I'm not eating much in the way of meat these days, my tummy was really unhappy about it. But they were so tasty! And Judy's devilled eggs with Chinese hot mustard were pretty awesome too. And we just had a lovely evening chatting away. I thoroughly enjoyed myself, which is something I don't get to do that often.

Malcolm arrived to brunch this morning in a gorgeous coat- the sort that Sherlock Holmes wore- I think it's called an 'Inverness'. Way cool and very appropriate in the weather. He has the most amazing things tucked away in his closets! I asked if he had the deerstalker hat, and he does, but it doesn't match the coat. Pity. :-) And he doesn't smoke, so no pipe.

The weather is supposed to be cold the next couple of days. The wind is already blowing and I can feel it just sucking the warmth out of the house. About the only place I can really get warm is in bed with the covers up to my chin. And that's with the bed heater turned up. Which would be more fun if James were here, but he's not, and a cat just isn't the same...
Posted by Liutgard at 7:17 PM 1 comment:

And the New Year has commenced... 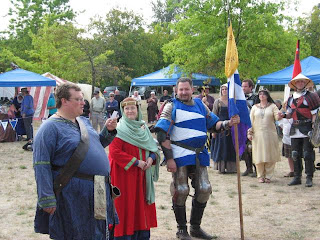 I found a picture of James and myself online the other night- from last September Coronet- don't know why I can't put the picture in the middle of the text- it wants to go at the top. Anyone know how to change that?
(I can't think of a cool title today. So sue me.)

The year started auspiciously enough- James and I went to a concert down at the cathedral, which was way cool (the woman from Temple Beth Israel has got a set of PIPES! Wow!), and then we came home, ate our black-eyed peas, cornbread, and greens, and then toasted the new year with Wanda and a bottle of bubbly. And then pretty much laid around the house on New Years' Day.

And the primary season has officially started off with the caucuses in Iowa. Huckabee gives me the colly-wobbles. Obama is sorta ok, though I still prefer Edwards. And it was interesting to see Hillary come in third. I understand her campaign was a bit upset at it. Early pools in New Hampshire have McCain and Obama in the lead. Should be more news come morning.

And I am enduring the trials of Jill's gown. Not happy. We'd discussed cotton velvet or velveteen- she bought silk velvet without checking with me. I HATE this stuff. Wubbly. And I'm having to hand baste the whole @#$%^& thing. And the diagonals (it has the 3M device on it) are especially bad. Gah. I'm about ready to set a match to it. And Saturday is the 12th Night Pity Party, which means housecleaning somewhere this week too. And dismantling the Christmas tree.