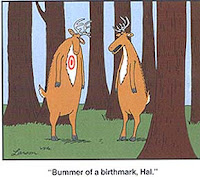 You know, there are times I feel like the universe is using me for target practice. This is one of those times.

My primary care physician sent me to see a rheumatologist, because the fibromyalgia pain, coupled with the arthritis pain, has gotten out of hand. I've been taking aleve and ibuprofen by the handful, with not enough relief, and for some reason she won't prescribe anything stronger. (I think this partly may be because of oversight by OHP, or simply something of profiling, as I live in a maybe not-so-good neighborhood, etc.)

So I went off to see the rheumatologist. She poked around, made frowny faces at my joints, and at my chart, but was visibly upset about the NSAID use. And apparently my creatinine levels are too high, which indicates kidney stress. So she told me to drop the NSAIDs, cold, and fill in with tylenol until we can track down the kidney issue. This does not please me, because if tylenol would do it, I wouldn't be taking the high doses of NSAIDs. And she sent me for more labs.

The next labs were no better. And my right knee (the bad one) and hands are pretty bad. So we took xrays, more labs, and she sent me back to my primary care to get a referral to a nephrologist.

Back to Dr Becher. She didn't seem to be terribly exercised about the kidney stuff, but took yet more labs and put in for a referral to a nephrologist. That was Friday.

Monday I get a call from her nurse. The Friday labs did more testing than just the creatinine. They were bad. The official words are Chronic Kidney Disease. They're fast-tracking the referral, and they gave me a sheaf of info- mostly new diet stuff- to go through while waiting for the nephrology appointment.

Interestingly, a fair proportion of the stuff in the diet recommendations, etc, are directly opposed to diet recommendations I have to follow to deal with my meds, mostly the bi-polar meds, and those are not negotiable. And the potassium is a problem.    This could be interesting, trying to balance all of this. The bi-polar stuff is not negotiable. But my kidneys are also very important.

So we wait and see what the nephrologist has to say.


In other news, Phil and Annie went to 12th Night with me, which was great fun. Phil even enjoyed court, which was unexpected. They are getting tucked in to the Madrone scene, and it helps that they got involved with Pembroke and his household right away. And they are both in armor, which is cool! Phil is enjoying himself, but Annie is loving it, and she's decided that she really wants to be a knight! That is cool as all get out.  :-D

Church is good. I don't know if we have the stove issue resolved yet. Annual meeting is Sunday, but there's supposed to be 6" of snow on the ground.

And my hair is still a wreck. Bah. Rain, I said! Now snow!
Posted by Liutgard at 4:36 AM No comments: