I hate hot weather. It's 12:30 in the afternoon, and already 88. Supposed to be around 100 today and tomorrow, and up to 105 on Weds. I think there will be a movie theater somewhere in my future. (Hello, Mr Potter!)

Not much happening, trying to not melt is my main plan these days. James was up for part of the weekend- he had a meeting Saturday. We set fire to the backyard (well, a grill-sized part of it), showed a picture of the fire to some cows, and ate them. They were mighty tasty.

In teh sewing room, I need to finish Korwyn's tunics, and then get my Queen Carmen dress done. Also will be working on Randall's stuff, fortunately that is kind of spread out amongst several people and I don't have to do it all.

And ice cream is still a Very Good Thing!
Posted by Liutgard at 12:26 PM No comments: 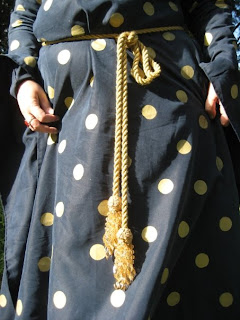 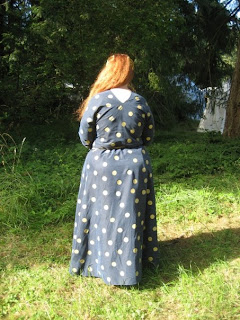 The polka-dot dress was a hit! Got lots of laughs and lots of compliments. And I found that I could actually work in the kitchen in it- I just tucked the sleeves into my belt to keep them out of the way.

The only big problem at Coronation was that it was so bloody hot. Mid- to upper-90s. My camp was back under the trees, but down on the field it was unbearable. I have no idea how the fighters manage it. TRMs moved court in under the trees, near the permanent pavilion, much to everyone's relief. I was only there for part of court- for Randal to be put on vigil. After that I went back to camp to deal with the chicken. Dinner turned out wonderfully, and the little dinner party was quite nice (even if I did accidentally call Countess Morag Countess Morwyn).

The switch to the gabapentin seems to be going well. Feeling better (well, except for the current lassitude from the heat) and not twitching so much. This is a serious improvement. And I get to see the new mental health person at my regular clinic, instead of heading down to see someone I don't trust. Definitely an improvement!

I put some of the hinges on wrong on the bed parts. Waiting for the weather to cool so I can try to fix it.

Starting to plan for Sport of Kings, and for September Crown. I'll be doing a Vigil Bath for Randal, and that will require a fair amount of planning.

Ice cream is a Good Thing. 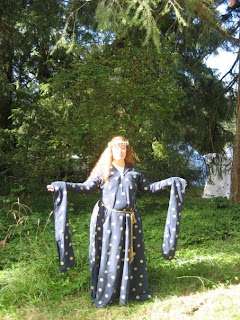 Posted by Liutgard at 9:18 PM No comments:

And then the Dementors come...

I read an interview once, with Joanne Rowling (she wrote the Harry Potter series), where she described the Dementors as sort of being a metaphor for depression and the havoc it wreaks on one's life. Well, she got that one right, I think.

Been a rough couple of weeks, dealing with both physical and mental issues. Saw the gal at Lifeworks- she was no help at all, was sort of 'well, what am I supposed to do about it?', which was irritating, as she is supposedly the professional. I left just as down as I'd arrived. And I had no cash on me so I couldn't stop for a milkshake. :-(

However, I saw Dr Becher this Weds, and things may be looking up. The levo-dopa is not doing it's job well enough, and the side effects- especially the somnolence and exacerbation of the depression, as well as the nausea- are a Problem. So we are adding in gabapentin (which I've had before and can tolerate) and gradually phasing out the levo-dopa. So far so good- The gabapentin takes a little getting used to- I was going to go to a rally downtown, but this morning, after a dose at bedtime, I am certain that I couldn't pass a roadside drunk test. I was having trouble staggering to the bathroom. It seems to dissipate in the late afternoon, so I can get out and go to the grocery, but mornings seem to be out for me until I get used to it. But I was feeling well enough to get upstairs and work for a bit last night, so I think I'm making progress.

Speaking of progress, I got the dots on my dress heat-set, and did up the side seams. Last light I got the seam in the maunch sleeve finished- did a false French seam. Have the other sleeve to do and the I get to put the pacing stuff on the side openings. After that it's just a hem to do. I also have the work to do on the bed- I got the moulding glued on the other day, still need to put a few nails into it, and then paint it and put on the hinges. Need to get the painting done this weekend, if it is to be dry enough to put the hinges on.

And I need to run by Burgerville- the new raspberry shakes are out!
Posted by Liutgard at 1:38 PM No comments: