And soggy Autumn is upon us... 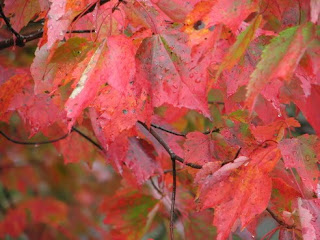 We had about two weeks of lovely weather, with sun and impossibly blue skies. and the leaves beginning to turn. Ainsworth Blvd was especially lovely- so many trees there were brilliant yellow or an orange-red. There is one that grows around a streetlight, so at night the whole tree is lit up. An oak down the street from there always has multi-colored leaves, mostly a brilliant red- it makes me think of an aging bawd, throwing open her clothes to show the ancient glories in all of their decay...

And now the rains are here in earnest. The leaves are about halfway down, and the streets and sidewalks are slick with their slime. I have to be careful even crossing the sidewalk between the car and the house. We've been having a lot of thunderstorms, and the sky is always dark grey. The sort of skies that make you think of depressing poetry. Dylan Thomas maybe, or Sylvia Plath.

I've had some good times though. I went down to Lydia's and spent a few days. Mostly cleaning, but we did go to her doctor appointment, and to the shower that the ladies at her dad's church threw for her. She got some very nice things, much of it with monkeys on them. I think we have a theme. :-) I found some cute fabric with monkeys on it several weeks back, and we made some buntings out of it. We also made some out of some polar fleece- it was striped like tiger stripes, only in two tones of pink. They came out really cute. I also have some flannel with tiny purple and pink flowers on it that will be made into several different things. We're kind of having fun making tiny clothes.

She's due January 15, but I suspect that we'll have little girls by Christmas. Lydia is very big already- at least as big as I was when he sister was born, and put together, the babies weigh as much as Annie did. Lydia is at about 29 weeks and we have a ways to go yet.

David doesn't have a job yet, but there is a good prospect, and we are all holding our collective breath.

Also in the news- I am no longer speaking to my father. Things have been rocky for some time- I was the last of the kids to be in contact with him, and I had been holding on mostly out of a sense of duty. I'm the oldest and all, the 'good girl', so this has been hard. He'd been rather nasty for some time, mostly about my political leanings. Condescending even. But a few weeks back, he said something on my Facebook page- in public- that went beyond condescending and into contempt. I'd been out for a few hours and came back to find that my page had sort of exploded. My siblings came out in my defense- even the brother who is quiet and never says anything to anyone. All of us kids had a Private Message conversation, and I 'unfriended' and blocked my dad. It was very hard, but I'd just come to the realization that I'm 45 years old, and I don't have to take this. He made my childhood a nightmare, and I don't have to let him do that to me as an adult.

In other news, I have become more active at church (St. Matthew's Episcopal)- I've been the lector twice, been helping in the kitchen and with potlucks, and have been going to the sewing circle on Tuesday morning. I'm getting to know other people a little better, and that is kind of cool. The parish is really small right now, but it's beginning to grow a bit- we ran out of bulletins last Sunday, which was a good thing.