August had Sport of Kings, a four-day SCA event with lots of classes for fighters. I mostly went to host a dinner. It went over very well, and I was pleased with how it went. And Phil and Annie unexpectedly showed up, which was delightful. They ended up talking stick and drilling a little with Amalric, which was fun to watch. I came home exhausted however, which was not so fun.

In September I went down to Myrtleholt for Summits Coronet. The weather was pretty ghastly. I spent my time sitting under Bera and Alail's dayshade, drinking tea. I was not particularly thrilled with the Laurel meeting. (Can't say any more than that.) After the tournament was over I drove to Ashland and spent the rest of the weekend with James. It was nice to be warm and comfy while the rain was coming down.

Went to visit my granddaughters on the way home, but had a difficult trip home- just north of the Coburg exit my wipers died. It was something in the link between teh motor and the arms that broke, after 32 years of service. But I had to drive the rest of the way home with no wipers. At night. With copious amounts of rain coming down. I'd prefer to never do that again.

In October I taught the second section of the Survey of the Middle Ages series, covering the time from the death of Charlemagne to the Magna Carta. It was utterly exhausting, but rewarding. I have a new map- Europe, modern borders but laminated, so I can draw on it. It's fabulous and was very useful. And hitting the Burgerville before going home was very nice.

November was bust with the Diocese Convention, held in Eugene. I was a delegate this year, which was interesting. There were a lot of votes on various positions, which was somewhat boring, as I don't know a lot of the people yet. But the two votes I was interested in were good ones. We passed a resolution to work on divesting our Diocese investment portfolio from fossil fuels. It will not be easy, and the financial committee will have quite a task to do it, but I think it is a step in the right direction. The other important measure was a resolution to support the advancement of marriage equality. This even made the Portland news, which was interesting. (I didn't know they cared about church matters.)

Saturday morning of Convention, James and I were going from the motel to the convention center, through the one-way grid downtown. I couldn't remember which direction which streets went, so I was looking up on the pole for the one-way sign.

And ran a red light.

James yelled, and that split second I saw a car coming from my left, and I turned the wheel as hard as I could, to get out of the way. Didn't make it. There was a very loud BANG!

I managed to turn around and pull over. The car was still going ok, so I figured that was good. Damage was... less than I'd thought, but still bad. 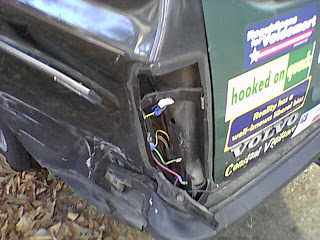 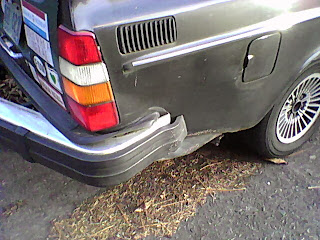 (Not all of my pictures would upload from my phone.)

The light panel on the driver's rear was crushed. The bumper was pulled completely out on the left, and it didn't bend or twist- it punched in the right side. And it had pushed back hard enough that it went up and over the trailer hitch.

The other driver was fine. No one was hurt. There was some damage to her front end, but her car was also drivable. Whew!

We took Zippy to a body shop for an estimate, and they said that they didn't think it could be repaired, and if it could, it would be $4300. Not likely! But James managed to pull the bumper back up and over, and pushed it on, though it is still missing some bolts. The light panel we're not sure what to do with. So she is going down to see out usual mechanic next week, and we'll see what he can do. In the meantime, I am without wheels, unless I borrow Wanda's truck, which I don't like to do.

Wanda and I went to see the 50th Anniversary episode of Doctor Who. It was interesting. Sure was nice to see David Tennant in the pinstripes again. :-D

But Thanksgiving was terrific! All of my kids were here, with their significant others, and of course two 3-year-old girls, to make things exciting. Turkey Day was rough, as the oven decided it was not a good day to cook, and the 4 hour turkey became a 7 hour turkey. But it was eventually done, and the rest of the dinner was very nice. And the rest of the weekedn was fun- the kids played games, I had some time with the girls, and I had time with James, which is always nice. Saturday we had a birthday party for the girls, complete with balloons, dinosaur cupcakes, dinosaur candles, a box of plastic dinosaurs, and new dresses. It was a lot of fun, having cake, and watching them chase each other with dinosaurs.

And I am hoping that I have something more to say soon!
Posted by Liutgard at 6:11 AM No comments: