Well, this winter is being difficult. Not the weather so much- that hasn't been too bad. But life has been very difficult.

First, ZIPPY DIED. I was really distraught, but there was nothing to do about it. We took her in because the front end was acting really weird. Turned out that the main bar that holds everything together was broken- one bolt was holding it together, and only partway. A good jolt or vibration would have left me with no steering at all. And the costs to fix her- if we could get the parts- would be far more than she was worth. And she would still be a 33-year-old car. So with heavy hearts, we donated her to the Humane Society. Wanda got a tax credit, and hopefully someone else will be able to get some use out of her.

That was in November. Then in the first week of December, I had a doctor appointment in Beaverton, and I borrowed Wanda's truck to get there and back. I was exhausted- Lydia and the girls had just gone home from Thanksgiving, and I was still exhausted. I love them to bits, but the girls really take it out of me, and I was completely out of spoons. I fell asleep at the wheel, drifted, and hit two parked cars. I was ok- one scrape, but the truck was totaled. I cannot possibly express how awful I felt about that. (Still do.) And it left us without wheels.

So Wanda dipped into an account (oh, I really felt bad about that!) and bought a little car for herself- a 2013 Toyota Yaris. Very cute little thing, silver, and she named it K-9 after the 'tin dog' in  Doctor Who. Then we got me a used Volvo wagon, 1998, with half the miles of Zippy. Gas, not diesel. Sort of a rose bronze color. I stuck an 'Allons-Y!' sticker on the back, and named it Alonso, so I can say "Allons-Y, Alonso!" Yes, I am a geek.

Lots of money spent, in large part my fault.

The doctor's appointment I was returning from when I wrecked the truck was a gynecological oncologist, specialty surgeon. I'd been having some weirdness, and my gynecologist determined that the endometriosis had returned. With a vengeance- I had a good-sized mass. She decided that she wasn't comfortable doing the laproscopy herself, as it looked like it was going to be pretty involved, and a specialist would be safer. (The oncologist later told me that the gyn was a rockstar for referring me to him- there was no way she would have been able to do it, and she would have had to back out and call him in anyway.)

So I had a robotic laproscopy. They took out a large mass, the size of my fist. There were a number of smaller masses, and further 'flecks' of the endometriosis all over. The surgeon said that it looked like a bomb had gone off. They had some difficulty getting the big mass loose- it was wrapped over the ureter on that side. They eventually got it loose. They also had to re-open the vaginal cuff (where my cervix used to be) to get one of the small masses out, and so that was re-sectioned and resewn. In all, the surgery was difficult- he says he'd rather dig out cancer than deal with endometriosis- cancer is a lot easier. And it took about twice as long as they'd thought. But the biopsies came back clean.

That was the 10th of December. Recovery has been difficult- a lot longer than I'd thought, and more painful. I'm just now getting on my feet, and they said it will be about May before I'm really back to normal. Joy.

Now just to make things really fun, I developed some serious pain at the back of my neck and down my left arm. I realized it wasn't going away, and Sharon Rose (massage therapist), who is also a rockstar, told me something was wrong and I needed to see my doctor. So I went in. My doctor was booked, so I saw the intern, who thought it was a bad rotator cuff. I went to Twelfth Night that weekend, and was miserable- couldn't dress by myself, was on pain meds, slept through the court I wanted to be at, and missed a lot of the event. (Did see Phil and Annie though, and that was nice, :- ) I went back to the doctor that Monday, as it became clear that it was not the rotator cuff when the pain started going to the right arm also, and my hand started having intermittent numb spells. They decided that it was a bad disk in my neck and sent me for an MRI. That showed a bulging disk and inflammation, but the person reading it didn't think that it was bulging enough to cause a problem. Well, I beg to differ!. He may not think so, but my body sure does! So back to the doctor I go. They want to send me to the pain clinic, but I think that is really just palliative, and I really want to fix what's wrong. I'm not sure how persuasive I can be.

I did discover that a somewhat contentious Laurel meeting isn't so bad if you're on hefty pain meds. Need t remember that. :-) )

So basically I'm living on pain meds, watching the clock, and having to do without if I have to drive or otherwise be awake. It sucks. It's no way to live. And very depressing. Very, very depressing. 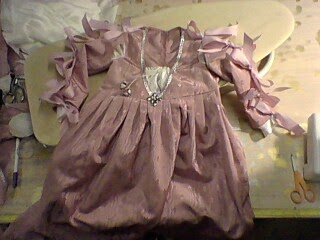 I took the twins to the ball Friday night at Twelfth Night. Made them little Italian Ren outfits- pint bengaline with bows down the sleeves. They were too cute for words. Unfortunately, Lydia and I were so busy with child management that we forgot to take pictures! And it seems that no one else got any either. But they had fun dancing, and they got to meet the king. He was very sweet to them, and I think they will remember it.
Next month, over Valentine's Day weekend, James and I are going to the coast for the weekend, by ourselves. No events, no meetings, no 'honey-do' projects, just time for us. I can hardly wait. I'm really hoping that the streak of bad luck is over before then. I really need a break.