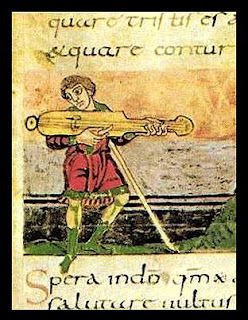 (A musician playing a cythara in the Stuttgart Psalter, c 830)

He needs more hair and some leather and studs, don't you think?

So I started another writing project the other night. For some background, Charlemagne had five wives. The first, with a Frankish woman named Himeltrude, was sort of legal and sort of not- there seems to have been some sort of informal Germanic marriage, but it hadn't gone through the church, so it was only quasi official. Then it came to pass shortly after Charles became king that he needed to make some diplomatic arrangements, so wife #1 was disposed of- forced into a convent so that Charles could marry again.

The second marriage was with the daughter of the Lombard king, Desiderius, who had been doing some spear shaking (and a bit of raiding and city capturing) towards the papal states, essentially threatening the pope himself. Charles, who was bound by an oath to protect the pope, married Desiderius' daughter in an attempt to neutralize the threat.

(Wives # 3, 4, and 5 were Frankish noblewomen- Charles did not make another diplomatic matrimonial arrangement for himself.)

Desiderius lost the war with Charles, and he himself was sent to a monastery (Charles favorite way to dispose of inconvenient persons), specifically to the monastery at Corbie, another house with ties to the royal family (a later abbot, Adalhard, was Charles' cousin). His wife Ansa, and the rest of the household was also given unto the arms of the church. Corbie was not a double house, with both men and women, so Ansa and any other women in the party (and her daughter Gerberga, if she was with her family) went elsewhere, most likely to Chelles.

I found one account (the reference to I cannot relocate, annoyingly) that remarked that a few months after she was put away, Gerberga died in the convent, *in childbirth*.

I've not found anywhere any suggestion at all that she had been unfaithful, so if it is the case that this happened, the child was Charles'. So what happened to it?

Well, obviously the child might have died. And that would be the end of that story. But if the child lived?

Charles had a son with Himeltrude, a boy who came to be known as Pepin the Hunchback. He was excluded from the inheritance, possibly because of the irregular nature of his parents' marriage, but he was at court, and there's some indication that he was put to work in the kitchens. This situation tells me that if a possible baby of Gerberga's was a son, he would have been sent to court to be raised, and since he would have been legitimate, would have been in the line of inheritance. But we have no record of any such boy.

So if there was a live child, it was a girl.

What happened to her? My best guess is that she would have been left at Chelles to be raised, and it was possible that they didn't even tell Charles about her existence. Why would they? Her mother having been put away, there was likely no emotional ties to her father, and she would have been somewhat tainted as a marriage prospect. So she might well have stayed there, been raised, and become a nun. It is possible that she herself never knew who her parents were. Or she might have known, and not had any options but to stay at Chelles.

This situation of course is ripe for a fictional account. :-)

I've only just started, and still in the initial plotting stage, and beginning to set up her situation, her history, and a taste of her emotional makeup. And I'm trying something I've never done before- writing in the first person. Oddly, it feels right. I think it is going to work. And just for a taste:
____
I don’t remember anything of my early childhood, only a blur of images. The sky seemed always to be pale and thin, and the wind bit as we walked from the chapel to the cloister. It was only as I was old enough to be schooled that I remember things distinctly– the sound of the bronze bells, the rough wool of my blanket in the dormitory and the cold hands of a sister pulling my gown over my head. Sometimes we had to break the ice in the basin before washing in the morning, and on Saturdays when I washed my limbs, my flesh rose in bumps like the skin of a plucked chicken.
Don’t look at yourself child!
Why can I not look, sister? It is my own body.
It is flesh, and the flesh is sinful. Only the soul can be pure.
She scrubbed at my knees until they were raw and the tears stung my eyes. I did not look at my knees to see if they were bleeding.
Was I happy? I don’t really remember. I hated Sundays, spending most of it kneeling through the long Mass and a sermon I could barely understand. Only a little less did I hate the Hours, up in the night and in the early morning as the first fingers of pink dawn crept above the horizon. I hated the grey porridge and hunks of brown bread. But what else was there? I knew only the life I had; I had no understanding or aspirations of the world outside the grey walls.
I was treated as well as any other child at Chelles; clothed, fed, taught my letters and Latin grammar. Sister Aethelberga told us stories from the Holy Scriptures, Sister Ansa beat us if we made a mistake in recitation. Occasionally the Abbess would pat my shoulder and slip me sweetmeats.
Ermengarde, You are well-born. Someday you might be great in God’s work.
Yes, Mother.
Somehow I doubted this, as I suspected that would require me to be better at Latin than I was. But these thoughts I kept to myself. I was too fond of the sweets to disappoint her.


In other news, I'm not feeling well, which in a way isn't news, but there it is, I'm planning to call my doctor tomorrow.

David and Lydia don't have their babies back from the state yet. There's enough pain there to smear over half the state. At the last hearing the judge directed that they both have psychiatric exams. This is ok with them, but it took three weeks before they were even scheduled, and the appointments aren't until the end of April. They also have to meet with a parent trainer, where the babies are at David's mother's home. Lydia is a bit apprehensive still, but is beginning to feel more comfortable with the trainer.

At the moment they're having difficulties with David's mother. There are issues with visitation, which is particularly hard on Lydia. And apparently the girls are being fed more and more formula, supposedly because it is 'easier' for David's mother, who apparently hasn't got enough room in her freezer. She's also convinced that Lydia can't provide enough milk for twins. We are not agreeing with this- When Lydia is away from the girls she's pumping her milk and storing it in her freezer. She has a half-size chest freezer (about the size of a washer or dryer) that is half full of milk for her babies.

All of this is just killing me, mostly I think because there's really nothing I can actually do to help them. Lydia is trying to be strong, but she so aches to have her babies home that it is hard for her to keep the rest of her life on an even keel. And David is still so angry that he's having stomach problems. And there's nothing I can do. And it seems to be my mantra these days- "I don't know what to do..."

But I am happy at church. I haven't been able to get over whatever barrier it is that I can't get past to take communion, and I still occasionally have the urge to bolt. But that is becoming less frequent. So I'm taking the step and on April 10 will be formally received as a member.

I'm beginning to get back into sewing, and I'm working on getting my new SCA name and a badge registered. I'll really be Liutgard, which feels good.

And the violets are blooming! Spring is here!
Posted by Liutgard at 2:10 AM 2 comments: