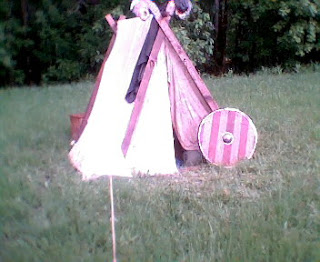 There's a story behind this picture- you see, across the path from where we were camped were a series of sticks with signs on them reserving space for the Prince and Princess, HRH, etc. The stick in the picture has a little sign that washed out in the photo, and it reads "Tanist and Tanista", that is, the heirs to the throne of the Summits. That sad little (and it is little- compare with the size of the round shield!) Norse a-frame tent belongs to the Tanist of the Summits. We took to calling it the 'Lonely Viking'. How he managed to stay dry on Saturday (the heavens opened up for a bit Saturday afternoon, reassuring us that this was indeed Egils), I don't know. He insisted that he was ok, so I guess he was.

The Girlz were there, except for Kimi (slacker!) and Annie (who was busy shoe shopping) and Laura even had a boy with her. (Oooooh!) Kelly came for a while but didn't stay because she was fighting the local coughing crud. Was sure nice to see them though.

Amalric and Caia were over for dinner Saturday night, which was very nice. Bryan and Alys were supposed to be over also but something got confused and they didn't make it. So we ate their dessert for them. The sweet cheesy goodness was very yummy, and went on wafers and apple slices and spoons and fingers equally well. I ate the last of it this morning with my French toast. Very yummy.

Managed to only forget a few minor things. Two semi-disasters though. One of the upper boards on the poster frame disappeared on the road between Portland and Ashland. I'd have thought I'd have heard or seen something but I didn't. It's just gone, and the bits around it were a bit loose, so it must have slid out. Now I have to figure out a way to replace it. Stephen and I stretched a length of rope to hold the curtain on that side, but that pulls on the lower hinge so I don't want to do that again. Guess I just have to go buy another 6' 1x4 and look for hinges.

The other minor disaster is that I splashed hot oil on myself while making breakfast- turned over a piece of French toast and splashed onto the back of my right hand and fingers. I wouldn't worry really except it hit my middle finger right around my ring, so now it's all swollen and trying to blister, and I can't get the ring off. I'm hoping that the swelling will go down overnight.

Besides the dinner success, I'm very happy with how the new canopy over the bed worked. I need to put the fringe on it and add a couple of ties but it was pretty cool. I was able to sleep a little later in the morning, and it was a fair amount warmer inside the bed frame than out. (Makes it harder to get up though!)

I am still waiting for pictures of Gunthar's elevation. I will post some when I get them.

The weatherman was wrong, as usual...

So when I left Portland last Friday, the weather report for this week was HOTHOTHOT, all week long. Naturally it cooled off Monday and was pretty cool the past couple of days with a shower or two. And at the beginning of the week the forecast for this weekend was mostly sunny, 65-70ish. And now they say mid 60s and rain. RAIN! At Egils? Surely they jest!

Problem is, I packed for warmer weather. I had to borrow a sweatshirt from James. And I left the black cloak at home. Sheesh...

I ran up the light red linen and James' mantle Tuesday, and my chemise yesterday. I did the embroidery on the mantle, except for that I ran out of embroidery thread with about a foot to go. I'll have to take it home with me to finish. Today I hope to get the tester for the poster bed done.

I'm having a powerful crazing for cookies...
Posted by Liutgard at 8:25 AM 6 comments:

News from the South!

All my lovely Slugettes, here I am in Ashland! I am posting in the middle of the night because I woke up and couldn't get back to sleep. Bah to insomnia! However, it does give me some quiet time to read mail, etc.

James and I went to Crown Saturday, and it was so hot your brains nearly dribbled out your ears. Lots of water and staying in the shade. We left as soon as the tournament was over- I desperately needed some A/C, some food, and a slurpee, not necessarily in that order. We stopped at Sonic in Grants Pass and soon I felt better.

I slept most of Sunday, which was expected. Monday I slept late but then I got up and did some stuff. Read, cut out some garb, and looked at cookbooks trying to find recipes for Egils. I'm just a bit bored with the usual stuff I make. Saw a couple of things in _Libro della Cocina_ and in the Taillevent that looked tasty. So I might try them out.

That is all for today- maybe later I'll post more about my eventful week!
Posted by Liutgard at 4:48 AM 2 comments:

So, it's done, and it now packed away with lots of white tissue paper into a box, and shortly I'll be heading down to the Kinko's to FedEx it off to Texas. I think it turned out wonderfully, and I think that it is one of the technically best of my projects. And I really never got to the point where I wanted to set it on fire, which was interesting. Here's a small picture from my little camera- better pictures to follow when Wanda downloads her camera. 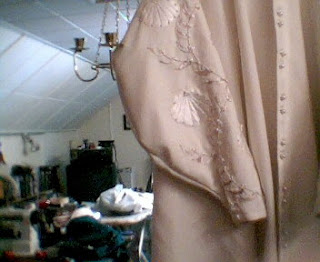 
I lost most of yesterday, was down with a nasty tummy bug- the kind that leaves you laying on the bathroom floor praying to die. I'd like to think that I lost ten pound being sick, but that's too much to hope. At any rate, I got very little done on the gown yesterday- and even that wasn't terribly productive. I worked on the cuffs and then tried to turn it around and discovered that, well, it couldn't be turned around that way. So I had to go back and unpick the stitches (done by hand with teeney stitches) and turn it around and re-do it from the outside. And then I came back down and went back to bed. Once is enough for that sort of thing. I'm hoping to make progress on a collar today. Ha. :-P I hate collars.

Saturday Gemma and I (and Wanda) went to the Pendleton store in Washougal. Wanda bought a bolt of green, Gemma got 6 yards of light blue for a bliaut, and I got a couple of remnants of the same red as my elevation gown. There should be enough for a tourney tunic.

I have to run out today and return a tape (a week late), pick up some groceries, etc. And I need to find a source of inexpensive candles, since the ones I have are backordered, and there's not enough for Egils. And I also need to start in on redding up tourney gear. I have until Friday to get all of this done.

So I guess I'm not going back to bed this morning. Bleh.

Buttons and buttonholes are done, all that is left is hem and final press. Here is pretty picture of sleeve: 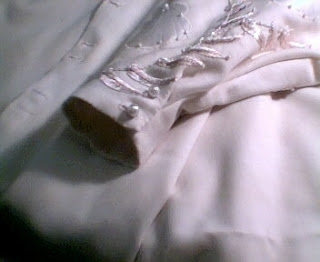 I've survived this far, but I'm not sure if I should be pleased that it's Wednesday, or completely freaked out. I have the sleeves done but I made a cutting mistake last night and have to start over on the body of the gown, which is distressing time-wise. I'd hoped to be well into that construction by now, and time is running short. I really want to get it out by Sunday or Monday, to leave plenty of room for shipping. * sigh *

The Laurel meeting is tonight, which may give me a little time to be forced to sit and do handwork. Maybe I'll put the sleeve linings in then. I have to run out today and get cake and strawberries. Planning to make berries and rhubarb. Yum yum!

Been in a lot of pain the past few days, running to a 7-8 range, especially if I'm moving- both knees are flared up, and not surprisingly, my hands. Taking as much ibuprofen as I dare, and it's not nearly enough. Tried taking some Tramadol, but that just puts me to sleep. Bleh.

James is off at Outdoor School with the kid he's shadowing. Missing him more than usual, as we have no contact while he's gone.

In happy news, the copy of Bagby's live performance of Beowulf showed up the other day! I've seen it three times now (not counting the time I saw him live in Eugene) and it is completely awesome! Really glad I made the investment!

Off to rustle up some warm milk- and hopefully to get back to sleep.
Posted by Liutgard at 3:46 AM No comments:

It was a work party! 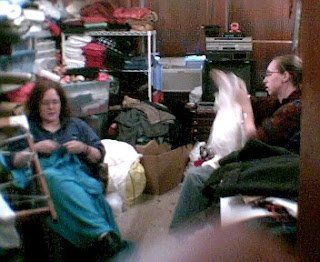 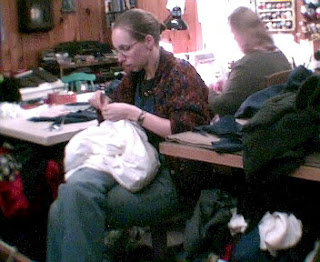 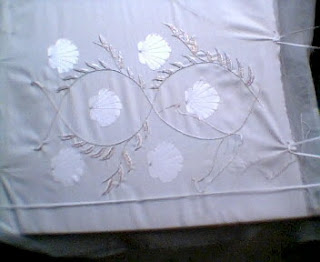 Well, there was this work party, see?

Marya and Ursel and Claire came over and we spent the day sewing. Except for the hour or so that we spent on dinner, we worked from about 1 to 10pm. Marya got an undergown done, Ursel got hers done up to the side seams (she still has hem and emellishments, etc. to do), and Claire finished her side gores. I embroidered leaves. Again. Still. But the picture up here shows the progress on the second sleeve. I'm getting there.

I took pictures of Ursel and Marya's gowns, but I am very embarrassed to admit that a large portion of my finger was in the frame, so you couldn't actually see them. Oops. So you'll have to take my word for it that their gowns are nice.

I am completely wrung out, so that's it for now. May add more in the morning.
Posted by Liutgard at 11:38 PM No comments: