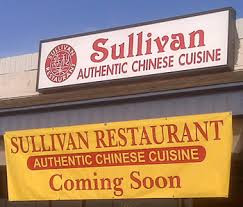 "May you live in interesting times" is said to be an old Chinese curse; I'm not sure I believe it is Chinese, but it does seem to be a curse.

So anyway, this month we celebrated Chinese New Year (ask Annie about New Year at Phil and Susan's! The FOOD!!!), or at least some of us celebrated it. I was busy throwing up that day, so there ya go...

Started out the month with Groundhog Day- two of my dearest friends had birthdays that day. It's always fun to give them a hard time about that. Apparently the groundhog did see his shadow back east, but here on the west coast he did not. Which may explain why we just have rain out here but my friends back east are still wondering if the mailman is under that pile of snow on the sidewalk... James' brother Geoff offered to let me shovel his driveway! He said he wouldn't make this offer to just anyone, but since I'm practically family... Riiight Geoff. I'm not falling for that one, family or no. Somehow there's a scent of whitewashed fence to that one!

A few days later I was sick again. (Still, yeah.) Was having chest pain that was oozing into my shoulders and upper arms, and short of breath too. But I didn't have the sense that the obvious was happening. So I called and got a same-day appointment with my dr, but didn't tell the nurse the whole story for fear she'd just tell me to hang up and call 911. We've been there, done that.

So I spent the week in and out of the clinic, while they poked and prodded and tested. EKG, was iffy but it was my normal iffy (stuff with the a-fib off and on), they sent it to my cardiologist but he said it was within my normal range, but to check all of my bloodwork. Potassium fine, sugars fine, the enzyme that would have said I was having a heart attack- negative. Thyroid was fine. Well, let's take more blood and test for other stuff. They put an oxygenation monitor on me and made me trot around the nurses' station (it's laid out in a giant donut, with exam rooms all around) with a nurse holding the monitor. Well, on my second turn around I sort of slid onto and slumped down the wall- not really passing out but not far from it. About eight people picked me up and walked me back in and onto the table. Was basically ok, just... sliding down a wall.

So about 6:30 that Friday evening, I get a call from Dr Becher's co-worker who was working that afternoon, she'd just gotten some of my labwork back, and did I know that my nortriptyline level was roughly four times what it should be? No, I was not aware of that! Turns out that some of the symptoms of approaching toxicity are... chest pains, shortness of breath, lightheadedness. Talking with her we determined that the best course would be to drop the nortriptyline I was on- NOW. None of the usual tapering it off over a month or so. So I dropped it. Felt not really good but ok Saturday, which was nice as James and I went for a long walk (there's a gazillion restaurants on Alberta!) and then out for Lebanese food. (Dolmas and lamb. Yummy!) Came home and had chocolate fondue with strawberries and pears and some Chilean red wine. Very tasty.

Sunday my body realized that something was wrong. James went to the early service at church, and I stayed in bed because I had a Very Bad Feeling. Very Bad got Worse an hour or so later, and I managed to get to my wastebasket before I lost it.

Dolmas and lamb and chocolate and red wine are tasty going down- separately- but not so tasty coming up together. It was pretty horrible.

Eventually I figured I was empty, and staggered into the bathroom to clean the wastebasket. And I slipped. So suddenly there I was, naked, upside-down in the bathtub, with the wastebasket upside-down on my chest. Yes kiddies, that was even more horrible.

By the time James got back I was in a pile of towels on the bed, sobbing and laughing at the same time.

I spent most of that week sleeping while I finished getting through withdrawal, felt better enough toward the end of the week that I finished Wanda's new Frankish outfit, and then dragged her off to a potluck that the new canton up the Gorge was throwing. Nice little event, quite enjoyable, decent potluck, and I met a young fellow who's also interested in Frankish stuff, so I had someone to talk at for a bit. This week is sleeping, more dr visits (and lab work- I think they should stop stabbing me and just install a tap), and some reading. I finally got through ILL several books, one of which has a LOT of the info I need on the abbey at Corbie.

This weekend I'm heading to Eugene- James has some meetings for the Diocese there, so I'm going to meet him there, spend some time with him and with the kids. And I'm also meeting with my all-time favorite prof for tea Friday. I'm so looking forward to seeing her- I haven't see her in years! And it will be nice to talk 'shop'.