Struggles Past and Ongoing... 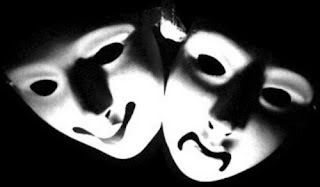 Earlier last night I finished watching Stephen Fry's two-part thing 'The Secret Life of a Manic Depressive'. And it shook me up a bit. Well, maybe more than a bit.

I was diagnosed when I was at school. '95 or therebouts. Got on the medication merry-go-round then because I had to, just to cope with daily life. It's been a wild ride since.

Mostly I struggle with the depressive end of it. I'm Type 2, so the ride isn't as bad as it could be, but it's still seriously unfun. I managed to get through for quite some time, mostly by sheer force of will, but not long after a traumatic breakup, in fall of '98, I had an abrupt manic cycle, and a subsequent crash. The breakdown, hit hard, and I never really recovered. It completely torpedoed my academic career.

I'm still struggling, 15 years later. I've gotten pretty good at recognizing the up cycles- they terrify me and I do everything I can to even them out, but the fact remains that underneath it all, the depression has never really ebbed. If you poke me just about any day, I'll likely say that I'm about a 3, on a scale of 1-10.

I'm having to deal with other medical issues too- the fibromyalgia, cardiac stuff, chronic asthma, thyroid problems, arthritis, high blood pressure, and now, chronic kidney disease, in part the result of the meds I've had to take to treat the manic-depression. I'm on a rather frightening amount of meds, which I have to be very careful to take at the right times, in the right ways.

Really, it's not a pleasant way to live.

Stephen remarks at one point in the film, after admitting to more than one suicide attempt, that he realizes that he really doesn't want to kill himself, he just wants to be dead. I can identify with that- but I don't really want to die- I have a lot to lie for- a man I adore, children I love dearly, and granddaughters, friends I care for deeply, a church and social life that means a great deal to me. But I will admit that there are times that I wish I could just go to sleep and stay that way. I've been in a lot of pain in a lot of different directions. I can't take basic analgesics anymore, and the heavier stuff makes me groggy and morose. The anti-depressants don't help that much, and the side effects aren't worth it. And we're having to scale back- and probably drop- the lithium, because of the kidney issues. So I'm kind of stuck.

I'm not functioning very well right now. Just sort of 'getting by'. And barely that. I can't seem to force myself to write, which is frustrating, because that is good for me. I have craft and sewing projects that are years behind. I bite my nails till they bleed. I've found myself pulling at my hair again (doesn't help thaqt the white is a different texture and it drives me nuts). I can't hold a job. Getting to church Sundays sometimes takes herculean effort. About all I feel like doing is sitting here, watching QI reruns, a bit of Netflix, hanging out on Facebook, reading email. I try to get down to see Teh Girlieez once a month or so, but that saps my energy so badly I usually end up sleeping for days afterwards.

Sleep is a problem. Either I sleep too much (exacerbated by fibro and arthritis flareups) or I can't sleep, like now. I feel like a zombie, and I know it doesn't help AT ALL.

Seeing the pain that Stephen deals with- and the people he interviewed- really woke me up to the state I'm really in. I'd been telling myself I'm 'well managed'. I'm not. Time I was honest about it.

At the moment, I don't know what to do about it. The meds aren't cutting it. Therapy doesn't really change anything. It feels good to watch cartoons, or QI, or Doctor Who, or the Marx Brothers, but the warm fuzzy doesn't really last.

I may never 'get better'. This may be good as it gets. But I figure that every day I spend above ground is a good day, and that's something. For now, it will have to do.
Posted by Liutgard at 2:31 PM 2 comments: