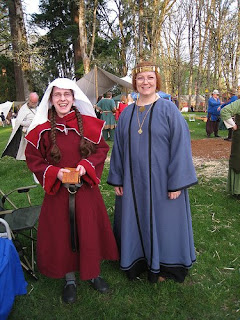 Meet Gemma, everyone! She's my new Student, and she's loads of fun. She's interested in a bit of everything, but mostly the 12th century, and some Roman stuff for her husband. I'm hoping that our relationship is good on all sides.

Went to Faire in the Grove yesterday, and had a great time. The weather was just about perfect, even a teeny bit warm. There were lots of people there, and I suspect that we'll end up with a few new people out of the affair. Amalric was running the fighting, and he had far too much fun. We all teased him about being a media darling- he was in the Forest Grove paper, and was dubbed the 'Duke of Yamhill', which is funny, because as he points out, Yamhill is a County! (See the article at: http://www.forestgrovenewstimes.com/features/story.php?story_id=120898233634764100)

I finished that blue gown Friday night, and I'm going to run up some stuff for James real quick, and then get back to work on the sleeves. I have to draft and cut out the rest of Gunthar's gown, too. Have my work cut out for me, certes. Also starting the planning for Crown and Egils. I know there's tourney gear maintenance to do too. No rest for the wicked. :-)
Posted by Liutgard at 9:28 PM