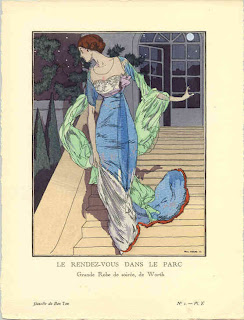 That song has been stuck in my head for days. I like the song, otherwise I'd be tempted to trot out a certain song from a Disney ride that is guaranteed to replace anything else you're singing. (Problem is, then getting rid of that one...)

Isn't this picture gorgeous? She looks like Cinderella. It's a fashion illustration from the Bon Ton magazine in 1912, and the dress is from Worth. This one is from my collection of Edwardian/Early Teens illustrations of gowns and pictures of existing clothing. I really like the period- it's not as fussy as Victorian stuff, but still very graceful and alluring. There's still some real corsetry going on in this one, but notice how high the waistline is! *sigh* Wish I was still that slim...

And in other news... we had Thanksgiving. James came up Wednesday night, and of course we spent Thursday cooking. I did the stuffing and gravy and cranberries and pumpkin pies. James made rolls and helped with the setup and lugging about the turkey. It was yummy, if a bit overdone (Wanda forgot to turn the oven down after she put it in). The pies came out really creamy and deeeelish! I am probably wearing them on my hips now though.

James had to leave Saturday (church stuff) but at least he was here for my birthday. Which reminds me, yet again, I did not get a birthday party! Whadda I have to do, hire a clown and buy myself a cake? *pout* No one sang Happy Birthday, either. I was bummed. But Wanda got me a very nice Pashmina-style shawl, and James found me a couple of new nutcrackers- both bakers. They're very cute and are on the mantel right now.

I'm nearly done with the dress for Ned (brown wool with copper trimming- turning out really nice), and I'm hoping to get Bera's teal dress done soon too. Thursday night is Project Night, and I want to have them done and out of the way then, because this weekend there's the work party, and I need to move things around to fit folks. And pick out some movies, etc. :-) I'm looking forward to it- I like having people over.

In the not-happy news, Zippy is down. She wants new glow plugs. It's been a couple of years, so she's due. But still- Wanda is leaving Wednesday, so we're hoping that she'll be done Tuesday evening. Hope hope hope. And this coming weekend is the Annual Training Conference, and I will be glad when it's over. Hopefully things will ease off a bit at work for Wanda after then.

James and I did a little shopping Saturday, and I found the dishes I wanted for David and Lydia. A nice set- the ones I'd looked at in Bi-mart were $16 for four 4-piece place settings. The ones I got at City Liquidators were four 5-piece place setting *with* flatware to match. A very nice ivy pattern. I hope Lydia likes them. And then there's the conspiracy with David... heh heh heh... Sneaky Mommy strikes again!
Posted by Liutgard at 2:47 AM

I sang you a Hippo-Birdie-Two Ewes, over here in MT, but I doubt you could hear me. :-(
I figured it was the thought that counted.
I'm forever unsure if I'm relieved to no longer get a B-day fuss, or if I'm missing it.
Glad to hear your Thursday went well--mine did, too. Went to a nice, cold football game on Saturday (it was in the teens!, but sunny). Messed up my knee in the parking lot (slipped on some frigging ice!), so no crawling around on the floor for me for a while (and I *need* new garb)! So I'm lusting after your tables in the House of Pain, and sniveling over my handsewing, which I despise.
--Maire