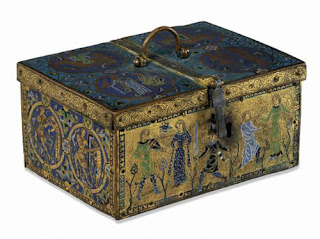 These aren't Carolingian Frankish, but 12th c French- two enameled caskets in a style we associate with the work done in Limoges. One of the things that they have in common that is unique is the polka dots! The first box has a woman dancing and a man playing the vielle. She's wearing a lovely bliaut with pendant sleeves, and it's polka dotted! Wild! *I NEED ONE!* And the vielle player has polka dotted hose! Must.Have.Some! On the second box,the poor unfortunate woman is being sent out of court on the left, and on the right is having a rather extreme hairdo modification! Her dress is virtually identical, with the same pendant sleeves and polka dots. What I want to know though... are the dots woven in? Embroidered? Painted? Or could they be sewn-on bezants? (Inquiring minds want to know!)

Stephen is coming to visit this weekend! Yay! He's coming in later tonight, probably on the train. I haven't seen him for awhile so this will be nice. Of course, I'm not going to flatter myself- he's actually coming to visit Mom Food. He already put it a request for manicotti...

This morning (Friday) I went down to PSU to do a short show-and-tell demo with Katrine and Svava. There wasn't nearly enough time, but we had fun. What wasn't fun was the trek to the building- there's construction all over downtown and no matter where you're going, you can't get there from here! I had to drag the boxes several blocks. Not fun. And because I was a dork and didn't read the parking pass (it was early- I hadn't had food or meds yet) I got a $30 ticket! ARGH! Stooopid me!

Thursday night we had movie night- watched Kenneth Branagh's _Henry V_. Terrific film. Morgan finish her neckline, and I worked on some chainstitched edges on a new Frankish gown. It's a soft mulberry wool, and the gown to go over it will be this keen tweedy wool in ivory, mulberry, a soft rose, a bit of burgundy, and- of course- some flecks of burnt orange. Heh. Of course. :-) I'm hoping to get it done for Crown Council next weekend.

Had a blood draw that morning and I was not happy- my veins were refusing to play, and after trying both arms they finally had to take it out of the back of my hand. Owowowowow!

My therapist was transferred to the Tigard office, and that is just plain to far to go regularly, so I have to break in a new one. Joy.

Between sleeping a lot (because I feel crummy) and trying to get some reading done (and falling asleep in the book) I haven't gotten much done but a little sewing. Which is ok. I think I've gotten over trying to push myself when I don't have to. Life is too short for hurrying.
Posted by Liutgard at 4:47 PM

Mom Food, indeed! How nice to be able to see your son!
The incipient Frankish outfit sounds pretty, and very cozy with all the lovely wool. You're quite the tease, though, not posting any pictures!
If the polka dots are meant to be respresentational, and not just a means of depicting texture or difference or something, I'd guess that they're either woven in, or maybe even painted or some sort of gold leaf application. I bet you could mimic it with the right fabric paint and a carved stamp--laurel leaves, maybe? :o)
--maire

I want some Manicotti too! :(
I'd tell you to ship me the leftovers, but I know there won't be any. I shake my fist at you, hungry brother!