The kitties go to Easter Services... 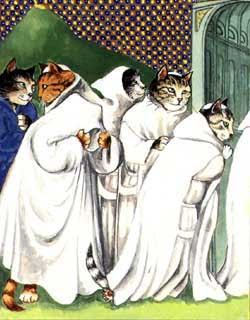 Such pious kitties, eh? Reminded me of a story we read about in my Canon Law class- apparently the mice had gotten into the wafers, and had eaten some of them. So what to do with mice that have eaten consecrated host?

Find a cat, sign the cross over him, and let God's will be done!

(So efficient, those Medieval folk...)

Well, kind of a lot happening this week and kind of not. Had an appointment with Nicole on Weds., and then went down to PSU, met up with Katrine and picked up the book she checked out for me. Got a short walk-through of the library too. Vairry naahce... Thursday Gemma and Mike came over, and Claire was here too. Gemma and I have been talking about maybe doing the apprentice thing. Taking it slow, as this will be the first one and I don't want to be stupid. Had a good time sewing and all. Friday Claire came back over, and then she and I and Sara and Ann Reed went out to the Pendleton store in Washougal. Sara found a bunch of nice clothes on sale. I found a little bit of wool (burnt orange) and a sweater that was only $10. Pendleton wool. Wow. We had lunch at the Chapel Pub and then came back here and chatted for awhile. Very sweet ladies, all of them.

Saturday I went out to the Defender's event in Mountain's Edge. Nice little event. Helped judge the A&S entries. I wasn't feeling so hot, so I came home early. Early evening, which was probably ok since I again did the sleep 2 hours, awake two hours rotation . Not sleeping well.

This morning Wanda and I went to brunch at the Berlin Inn with Bera and Alail. Got to hear all about the house in Salem. They'll probably be moving in early May. Sounds like a perfect spot for them. And they'll be in the Summits, which also means that Alail could fight in Coronet. Heh. That would be amusing. :-) They brought a shirt for me that they found in Eugene- has a picture of a pocket on it, with three slugs crawling out of it. I need to embroider little crowns on them or something.

Tonight is laundry and maybe some more sewing. Tomorrow I have to clean my room thoroughly. James will be up sometimes Tuesday. Yay! I haven't seen him since... 18 Feb. (I hate this, being so far apart and with the gas prices going up so much. Makes life very difficult.) Wednesday we have dinner company, and Saturday is a Street Prophets meet-up here. A busy week ahead!
Posted by Liutgard at 7:47 PM

I thought of that fairy tale about the cat and the mouse who invested in a jar of cream together, and they decided to put it in the church so that they wouldn't be tempted to steal from it. The cat gets hungry and tells the mouse he has to go to church to be a godfather. When he gets back the mouse asks him what the kid's name is. "Top-off", he says. He then makes subsequent visits once a week, to 'godfather' the kittens "Paw's in", "Half-gone", "Quarter-gone", and "All-gone", respectively. The mouse eventually guesses the ruse, but that doesn't concern the cat too much, as he just eats her instead..

Where's that from? I can't remember. Sounds like it comes from one of those storybook sets. Which are still in a box somewhere.

Meant to tell you- the newest nurse at my doctor's office is named Wassalisa! She was very surprised that I knew about the fairy tale! Ahh... "The morning is wiser than the evening..."

I do believe that one is straight from the brothers Grimm- I think there is a version of it in one of the Junior Classics books, and I know it was also in my big fat navy blue copy of Grimm, which I know is in one of my personal book boxes in the basement somewhere.

Wassilisa! She was one of my favs. Those crazy Russians and their Baba Yaga!