Franks but no beans. 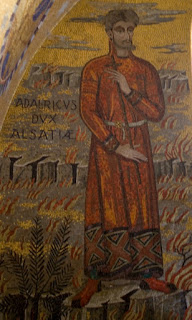 (The picture is of a 7th century Duke of Alsace, named Aldaric. Nice, nice clothes...)

Sweet meat after sour sauce, they say, so here's the sour sauce:

The CAT scan in September showed a tumor about 5mm across. The scan in January showed it at a little more than 9mm, which is a significant increase. So they did a PET scan. The tumor was just a little too small to get a conclusive result, so they'll be doing another scan in June. They may decide to take a biopsy then, or maybe simply do surgery and get it out. It's not interefereing with my breathing at all- it's in the lower lobe of my left lung, and toward the outside. Hopefully will be fairly easy to get it out. What happens from them will depend on lab results. Very anxiety-making, but nothing I can do until June.

Think it's too early to lay my sleeping bag out front of the Schnitz? My tickets are for June 4th. Maybe a little early. :-)

I also have a ticket to see the formal installation of the new Episcopalian Bishop of Oregon. It should be interesting- I've never seen anything like it before, and they know how to put on a good show!

And I've been working some more on Frankish stuff. To the extent that I'm seriously considering changing my SCA name. Liutgard or Liutberga. From Luxeuil, which as it turns out, has a number of ties to the monastery at Corbie. Corbie... just can't seem to get away from that place...
Posted by Liutgard at 10:04 PM